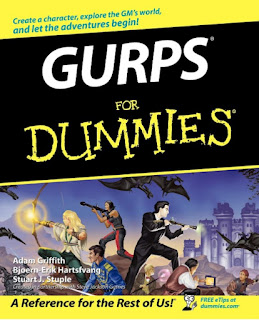 There are a couple good resources for helping create a GURPS character, but nothing beats experience. The GURPS for Dummies book has some good basic descriptions of abilities and skills, and it is a getting started resource that helped me some until I started to get deeper into the subject. 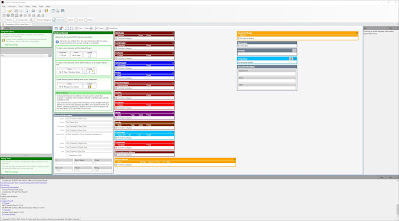 Nothing beats iterating over a character design until you get it perfect. The GURPS Character Assistant program is great for this, just be expecting to be loading up, tweaking, printing, loading up, tweaking, and printing your character until all the "cool to have" skills are gone and you are left with the "must-have" ones. You will forget some of the skills you need! And you will be swapping skills out of templates (such as the Dungeon Fantasy ones) to switch up for the skills you really want - even if they are off template some (get GM approval for swapping skills and tweaking your design and tell them why).

The best piece of advice I have is to create your character history!

Once I did this, picking skills became way easier for me.

Instead of aimlessly wandering a supermarket randomly throwing things in a cart, I had a history I could go through, say yes, she learned this skill growing up, and she needs this because this is in her background, and she fights with a spear instead of a mace (and does not need two shield skills and a generic throwing when throwing/spear is a much better pick). She spent her youth in the woods and doing a lot of exploring, along with traveling in her seminary years, so she has a few wilderness survival skills focused on the colder climates. She knows how to ride and care for a horse. She fights with a shield and spear, the weapons of her goddess.

I ended up dropping a few of her more social skills, such as ones she has not developed yet such as public speaking and leadership. Those were "nice to have" but I can see her buying those as she does that in the game and needs to improve in those areas. Nothing in her history said she really needed them either, so I dropped them for a few more survival skills.

Would I like to have them and are they a part of my character concept? Yes! Are they something she could buy later as she leads people and gives rousing speeches? Yes. Some skills fall under that category of "future history" and go on your shopping list for character advancement, but she may not ever need those or end up buying them given the adventures she has, so it is better to wish-list them and save the points for skills you should have given your character history.

Another great tip is to use the equipment list, put things in backpacks or containers, and track those separately as weight. The loadout manager lets you create loadouts, so I created three load-outs for her:

Since things are heavy and combat speed matters, she now has a few options for tracking weight carried and her current speed. When she is in town, she is not typically carrying a spear and shield around everywhere unless she is just passing through. When she has enough money and needs a "casual" loadout with nice clothes for temple day or visiting royals in a castle, I will create another for her. The combat loadout is travel with her backpack dropped on the ground. The backpack by itself weighs 24 pounds, and could carry 16 more, and dropping it bumps her up to light encumbrance instead of medium, giving her a better dodge and a move of 4 instead of 3.

Oh, how I love weight tracking and standard load-outs in old-school games. A lot of people are deathly averse to per-pound encumbrance, but I see creating load-outs as an integral part of character design and the icing on the cake of a well-designed character.

Create standard "load-outs" for different situations and modify them from there.

When you design a character, especially for fantasy where the weight of armor and weapons really starts to matter, you realize the tradeoffs you are making in that weight to combat speed calculation. Not every character is going to be able to sprint at full speed in plate mail like you can in a pulp game, and your party's "armored nuts" are going to be slower but be able to take a lot of blows up there in the front ranks.

You start buying extra points of STR, and it is not just for damage. You give the heavy bags of treasure to the mages and back rank characters first, so as not to immobilize your already-burdened front-rank fighters. Your choice of armor - for each character - matters a whole lot. That armor choice influences positioning and combat. You build a travel loadout for each character should you need to go without mounts or hirelings, so you can walk all the way there and still have your fighters in plate mail get there without slowing everyone down too much.

Does your armored nut dwarf fighter travel with his plate-mail off, keeping the full set of armor in a pack mule, and wears studded leather armor when on the road? That difference in speed could mean the difference between a one-day trip and a two-day one, and that brings up issues with carrying supplies, traveling at night, camping and being able to move to avoid encounters.

Or maybe you create a lighter loadout for your party for special situations, like raids or other actions where you need to move fast, get in and get out, and avoid pursuit. Maybe your front-rank fighters don't have plate armor for these missions, and focus on speed and hitting power so they can work more effectively in maneuver and tactics.

If you look at any book covering war history, and you get the story from the perspective of infantry, you are bound to get a part of the book discussing what they carried and how. You will get information on the lighter weapons they liked and the heavy ones they didn't. How they carried ammunition and pieces of crew-served weapons for other members of the unit. How the unit shared the load with supplies, food, water, and other necessities.

In war, you optimize loads and track detailed weight. Even in camping and hiking, you do the same thing. What you carry and how you carry it are as much a part of your character design as your skills, abilities, spells, and powers. Great gear in itself is a power, and this is that hidden part of old-school gaming so many are adverse to but it is one of the most rewarding parts of the game for me.

I played Skyrim and I loved it when my character slowed to a crawl carrying too much junk. I used survival mods and staying too long in the cold meant death. Slow movement meant increased exposure. There were times I could get to a dungeon in a frozen part of the map, but could not get home after looting it because my character was too slow from all the loot they were hauling and died from exposure. In warmer parts of the map, they were too slow and got killed by pursuing ambushers.

Once you really get into gearing a character and optimizing based on weight, you start to see and play the game in an entirely different light. Without weight tracking, you tend to min-max solely on combat abilities assuming that "full unencumbered move" - and this is completely theory-craft unrealistic, like some sort of video-game character who can vacuum up 1.6 million gold coins and a full backpack of plate mail armor pieces from a Diablo II dungeon and not be weighted down one bit.

And one of the best parts about weight tracking is a great GM will apply the same considerations to enemies. Those plate-mail armored orcs you don't want to fight? Yeah, you are all lightly loaded, you can outrun them all day, or just move at normal travel speed and they will be left in the dust after a few hours. If they ditch that armor and rush to catch up, that is another thing entirely, but when they catch up to you, guess what? That's right, they ditched that armor. And they are probably winded from having traveled at a faster rate to close the gap.

And this lets the players take advantage of situations that would have normally penalized them, and use it to their advantage. As a GM, you just don't use rules to punish players, you use them fairly for everyone, and if the players find a way to work that system to their advantage? You let them have it.

One of the most difficult parts of GURPS is character design. This is why people quit before they even start. I found my cleric designed in Dungeon Fantasy/GURPS took up less sheets of paper to print and read than her in Pathfinder 1e. She was this dense, tightly designed, weight-tracked, and she was a masterpiece of a piece of design and trade-offs. Her skills and abilities reflected her background. She had different "operating modes" depending on her situation and gear.

Just keep designing different characters and be unafraid to make mistakes. If you omit a skill, get approval from your group to make a change to better get a character you are excited to play. Shop for skills and abilities based on your history. Browse the skills in the book, and understand the subtle differences, like between perception and observation. Don't be afraid to drop skills and put them on your wish list. Drop duplicate skills you don't need, like skills in several types of shields. Swap skills for ones you want.

And design characters from other genres and times to understand how setting reflects on character design. In fantasy, transportation means walking, carts, sailing, and horses. In modern times, people drive cars and take mass transit. In a sci-fi game, maybe there are monorails everywhere, and driving and owning a car is not that important for urban characters. These considerations apply to your history. and get reflected in everything from lore, background skills, and hobbies.

I like my more detailed survival cleric. She outshines her Pathfinder 1e version in many ways. Pathfinder 1e has its strengths in variety and structured builds, but Dungeon Fantasy/GURPS lets me play game designer and craft a character based on the limits I create in my mind from a character's history and background.

I don't need a book telling me, "Clerics are this but not that."

I get to do that.

My cleric is this, and not that.

While the structure in Pathfinder 1e is there to speed character design and play, there are times I find it severely limiting. Hero Lab is a program designed to enforce the limits of your choices. With GURPS Character Designer (and Dungeon Fantasy), you start with limits based on profession and you are free to break them. It is a program, and a game system, intended to be a box of Legos used to build any character you can imagine.