Starfinder: Much Better as a Hexcrawl 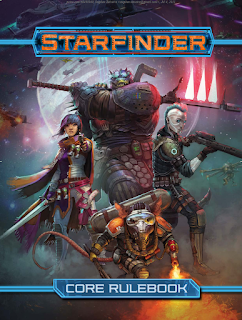 No shade is thrown at those who play the adventure paths and love them, but I have been playing Starfinder as a hex-crawl and love this. This is my sort of Heavy Metal-inspired randomly generated world, where all the ancient civilizations on these worlds were Pathfinder 1e, the worlds destroyed and forgotten over millennia of war, and then sci-fi civilizations try to tame these worlds and setup cities and colonies on them.

And those sci-fi civilizations are all at war with each other to control the only supergiant solar system in the galaxy. A "throne world" system so large, with so many worlds, with so many ancient treasures and raw resources the faction that controls this system can set up an empire that lasts thousands of years and will reach thousands of light-years away.

So these worlds have ancient temples in them (hello reused Pathfinder 1e dungeons), and sci-fi factions constantly invading, landing mercenaries, conducting starfighter raids, hiring defenders, exploring, settling, repairing destroyed infrastructure, and building armies to try to hold these precious worlds for a while. You have free traders and mercs operating their own fleets and selling services, planetary directors in charge of rebuilding and exploration, and all sorts of stuff happening.

Lost Pathfinder 1e magic items like +2 swords and staffs of wizardry and priceless artifacts. There are black markets for things like that, and groups interested in ancient magic that would pay - or kill - to have them.

And between planets, starships roam, setup no-go zones, control space, piracy & trade are rampant, and there is a lot going on up there.

Part of why I felt so turned off Starfinder was my beginner box experience. The money was too tight. Rewards were strictly controlled. You were given a free starship. The story felt a bit like a railroad and had you working for undead factions that your lawful good space paladin may honestly never wish to even associate with. There was a bar encounter that felt like it assumed combat (in a packed nightclub) and did not really present alternate ways to resolve the problem, like hacking, sneaking in when the place was closed or other "great idea" sort of approaches. 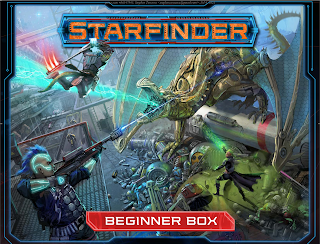 And it did not feel like it had that sense of freedom that I wanted from a sci-fi game. Yes, the beginner box is excellent for teaching rules and concepts, but what I love about sci-fi is not structured story scenarios - it is the freedom to go anywhere and do anything. Playing this adventure I felt there was not much else out there beyond the story. There was another dungeon level that you could fill in yourself as an expanded part of the experience; but I would have loved a mini-area of a moon, a bunch of hexes, that the team was hired to explore, and you were free to fill that in with suggested locations, mini-maps of destroyed stations you could put down and fill in, resources and treasures to find, and even some of the hexes start a small starship battle.

I now have the freedom to help a faction settle an area of the map, sort of like Kingmaker, or become a leader in the faction myself. I can even hex-crawl in a starship in space if I create a map of an asteroid field or an uncharted area of a moon. There are probably space stations (for different factions) with tons of missions to take, like cargo hauling, starfighter raids, rescue missions, recovery ops, VIP transport, passengers, and any other thing you can imagine.

Money is still tight, but with infinite random encounters, dungeons, and resources out there that is my problem to solve - not what the module will give us next (and we will be disappointed again they are being too stingy with rewards).

That alone is a huge change.

You want money for gear?

Get off your butt, there are plenty of unexplored hexes out there and random tables to roll on. Better yet, make a deal with a faction interested in the area to clear those hexes out, for a price, so they can resettle them and rebuild those ruined agricultural farms, hydro stations, and monorail lines.

And take all the loot sitting there as bonus cash.

Maybe you will even find lost ancient ruins.

And we need a mech if we ever want to take care of that purple worm living at the Ag-Farm. Gonna be expensive, but the reward will be worth it. And I am sure once we go down in the worm tunnels we will find even more loot. Bring a flamer.

And the setting I created too, a near-infinite system of strange worlds, ancient ruins, hundreds of factions, and open wars with each other keeps things interesting and gives me that Heavy Metal vibe I wanted. I don't want "quiet planets mostly at peace with each other" - I want conflict. I want multiple factions in every world - and between them - and a situation that keeps changing. It is rare for one faction to control a single world. Installations are won and lost. The battle lines change. Factions take losses and look for help. Evil factions grow in power and need to be pushed back. Ancient factions, such as dragons, still live on these worlds and deal with outsiders.