M2E Traveller: Breaking from the Norms

With all my exploration into M2E Traveller and the OGL retro-clones such as Cepheus Engine and Cepheus Light, I find it fascinating the power nostalgia and the traditions play in these games. I watched a video on Youtube the other day on Traveller, and a player brought out his ship's deck plans and reminisced about all of the adventures the stock ship had seen.

I am getting the same feeling with the 3rd Imperium setting in a lot of what I read and watch as well from the Traveller faithful. I wonder with that feeling of nostalgia so strong is stepping outside of the norms for Traveller a good thing or a bad thing?

I know, it is your game, play how you want. And I play for just me these days...so who is going to argue?

A strong source of support for DIY Traveller games comes in an 'official' book, the Traveller Companion. The book is almost entirely alternate rules for new technologies, character generation, XP systems, and other home-brew hacking of the game and its systems. This book begs us to change anything and everything about the game, so it is a strong argument for doing whatever you want and making your own universe and conflicts.

I like this book and its message of "the game is big enough for everyone" and the focus on tweaking and customization. The base rules hold together the universe and systems, and past that point you are free to take the game in any direction you can imagine.

Another pro-DIY product is the Traveller Starter Set. I feel a lot of information on the 3rd Imperium here was left out to create a more generic and universal experience. My first experience with this edition was with this set and I still get a very strong DIY vibe from picking up the booklets and flipping through.

Another point is on the emphasis on creating subsectors, randomly generating stars, and giving you a huge blank map to fill out and explore on. You don't need a large, established setting here, and the game is complete (save ship design) and sets you out on adventures and exploration of your own.

Part of me always likes the exploration campaign, and if you are cruising around a galaxy that has been mapped in every direction for a thousand parsecs it is harder to run these games. I have always wanted to start "on the edge of the map" and go out from there, and while that is possible, you still have a lot of unused sector information sitting back home. That can be a good thing since you need to know what and where "home" is and who the major subsector players are, so it is helpful.

Part of me though likes "fresh starts" and some borders and political drama to paint a backdrop onto exploration efforts. I like places where there is some "fight" going on, and the explorers "out there" are critical in making discoveries and supporting the home planet. And then, the bad guys show up and try and jump your claim, and it is on... 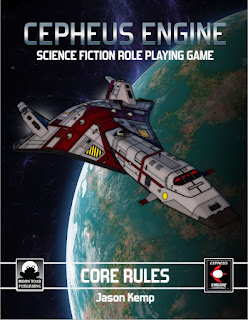 Really, I feel what my thoughts are on this subject are like this, "Do I play, mod, and support M2E Traveller for my home-brew games?" The advantage is I speak the language with the game and more people get what I am talking about. I do feel if you are supporting and playing the 3rd Imperium setting, you should play the official game (and the most current version if you want to support the creators of the game).

The alternative is, "Do I use OGL games like Cepheus Engine or Cepheus Light for my home-brew games?" I am supporting the OGL version and bringing attention to it, and supporting the community of OGL creators. The more discussion and exposure for these games, the better it is for everybody. The network effect also means the more people talk about and play OGL versions of Traveller, the more they will play the official versions of the game as well (M1E and M2E).

People forget the lessons of the OGL and create walled gardens out of fear and short-term thinking. There is a reason D&D became dominant and that is because of the OGL and d20 SRD. Variants of the game make more people play the official game. The noise and discussion generated is greater. The rising tide lifts all boats, and the largest boat the most. This is why I feel Cepheus Engine and Cepheus Light are important to the success of mainstream Traveller and good for everybody who loves the game.

In my session-to-session play, it does not matter much what I play - this is just me and what matters is, "Am I comfortable with the system and having fun?"

When I share my experiences with others it matters. 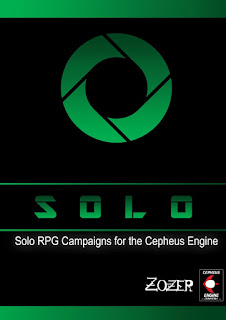 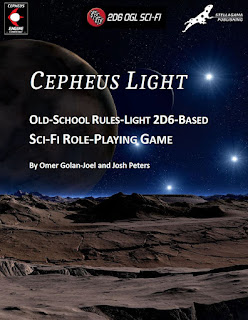 The math changes when I figure Cepheus Light and Solo into the mix. These two games (along with Cepheus Modern) forms a sort of "fast solo-play gaming system" that I like and appeals to me for one-shots and fast games. I have created M2E Traveller characters and love the experience, writing down every life event and creating a mini-history for this person that I get to know through character generation.

It takes a while though, at least an hour of so the way I do it, so the faster and less complex character generation of Cepheus Light really appeals to me if I want to run a "monsters in space" game where the crew is disposable and like the cast of a horror movie. For these games, I don't want to spend an hour creating each crew member, I want a 6-7 person group ready to go in 30 minutes all by myself.

I have a digest book coming for Cepheus Light and the PDF in my hands (though my printer is out of toner so I am waiting for that to get resolved). More on Cepheus Light and Solo when I can print up some sections and play.

I love the selection of games here and the options. I love the OGL versions of the game. Right now I am playing both Cepheus Light/Solo and M2E Traveller and will report back on my experiences soon. At this point, talking about the games, raising awareness, and playing is what I want to do and what I am going to do.

It is good to be exploring space again, no matter how you choose to get there.
Posted by Hak at 9:04 AM No comments: