After a time playing the game visiting other servers and such. I have come up for an idea for season 2 of our Minecraft server. There is an interesting assortment of plugins for Minecraft to make the game more roleplay focused I would love to have. Currently the game is caught between versions of 1.6.4 vs 1.7.2. In the newest version has a lot of features I really like, such as the new biomes (different terrain types within the game's world), and new plants and such.

My thinking is to develop a 1.6.4 server setup with the cool MMO and roleplay mods the give the game classes, crafting jobs, player-owned plots and such. Even the older vesion has less cool stuff than the new version, the 1.6.4 version had a lot more support for tweaking the game to the things, as a roleplayer-centric person I am, wants.

So season #2 will start in a couple months after I see what exact package of plugins I want to try, the old Season 1 world will be archived so no one will lose anything as we try the new setup.

I did learn the backbone of the plugins, called Bukkit Mod is a long way off from being updated to the 1.7.2 codebase along with the delay of updating the plugin makers have to do.

The question would be then, wait for the update to happen, which could take a while? Or try a new setup?

This old Castle, and Great Railway to Adventure

Well, well, we find ourselves making progress in bite-sized chunks!  But this is the fun thing about Minecraft, it's a huge sandbox and you play at your own pace doing various project to civilize your own little world. We have shifted from surviving to actually building out our base.

We added a new, bigger garden to make growing lot of crops easier. A lot easier than the old courtyard as seen in previous episodes.

Hak has been doing gangbusters on the castle rebuild, we are expanding the foundation by 1.5 times and switching to grey stone bricks.

One thing we have found is that in Minecraft once you start settling in to your own home town you start branching out to other areas in search of biomes for raw resources. The plan is to build satellite stations or base camps where we can use as a base to find dungeons and NPC villages. I have an idea to build a powered rail tramway between the hub so we can cross great distances with just a little fuss. It requires a TON of iron for all the railwork, but is very fun when you are done.

The monorail is in its beginning stages and the powered rails make the trip speedy and automatic.


The castle proper is getting expanded. Hak has a dream for a nice place.


You are moire than welcome to log into it and help our or even build your own addition, heck even running an exploration hub would be fun!

A bonus treat :) We are enrolled in the Everquest Next beta! When NDA permits, we will issue reports to our followers. It's a Minecraft style game as well, so I can't wait to see what you can do there too!

~George
Posted by Unknown at 11:36 AM No comments:


We had a friend Keegan log in to our server and he quickly criticized our muddy old fishing trough, a small little strip of water in the garden we would fish up dinner from, so he went about making the castle a proper replacement:

It has awesome overhanging trees, a nice and deep, a waterfall, a secret, and a couple lily pads. A wonderful addition to the scene.

Another thing he added was a chicken machine. A way to auto farm eggs (kind like those chicken farms where the stock sits in a cage and a hopper collects the eggs, I prefer free range chickens, but we need eggs!):


Hak got a puppy!

I had a saddle I got fishing, so I gave to 'cowboy' Keegan so he could round himself up a fine horse he will name Chestnut:


Keegan added a water pit to our spiral staircase of doom so I would stop killing myself falling. IT'S A 500 MPH YOLO DROP!


Also our deep core mining tunnels produced a load of redstone and a small pile of diamonds. Our goal is to get to the first bedrock layer where the good stuff is and get some TNT to do some controlled blasting. Eventually we are going to build a large mining chamber with a lattice of sub tunnels like in the James Bond movie 'A View to a Kill'. Notice my awesome super-claustrophobic mining shafts! Built like a Boss!

It's fun to see people add things to the castle and see what creative ideas they add to the sandbox! My next task is to create a yard for the chickens and an external veggie farm, and an outhouse. Hak has his job cut out for him enlarging and fixing up the castle.


All in all a fun game to share with bro's and I hope to see what other visitors can add to the place.

You are more than welcome to join in and help out!
Posted by Unknown at 9:50 AM No comments:


Another day in season 1 world where we get some more done on our home castle. So far its shaping up.

On week one of our server, mighty Keegan of "Minecrafter's Home Glass LLC of Las Vegas" bestowed upon us stained glass...and it was good. 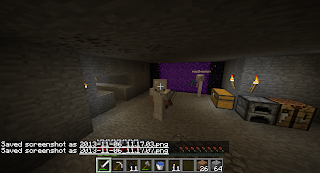 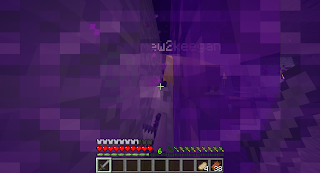 Black Rock Depths for you WoW  players...even has orcs. I want to build a castle here! Keegan said it was too dangerous, I DON'T BELIEVE HIM! It looked perfectly safe...

Here is the newer Deep Core hub, we are going to redo it too look like Stargate: SG1 so it's a work in progress: 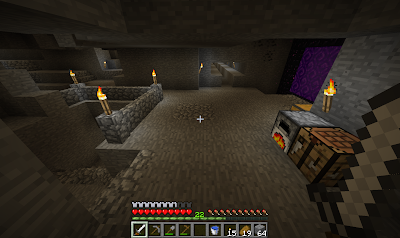 Remember the chicken machine? Since a Creeper attack nearly destroyed it, Hak built a bunker around it. The fun part is that the big crate is 1/3 full of eggs now, in a day...I wonder if it will explode... 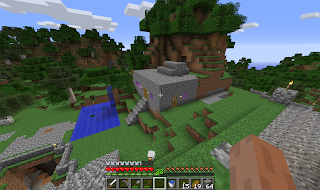 The newer back throne room Hak was working on is nearly done! 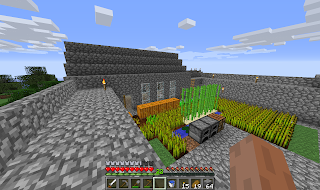 The Nav-Pole is still there, and I need to get an external farm going for my garden and make a place to park horses here: 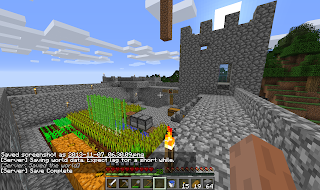 CASTLE GUTS, much improved, bigger so we can partition into player rooms: 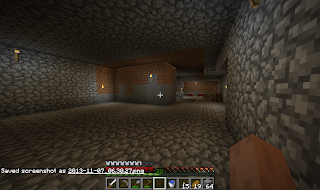 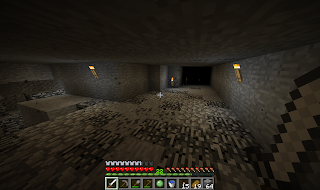 Overall though season #1 is turning out fun, we have yet to go out and explore the world too!

Posted by Unknown at 7:30 PM No comments:

I Wanna Hold Your Hand - NOT!

One thing I love about Minecraft is all the experimentation that goes on. You are free to just try things to your heart's content, come up with silly plans, and experiment. The game does not hold your hand, tell you 'this is the way to do it,' or lead you through the discovery process. Things are left open intentionally for you to try different theories and contraptions, and the game's designers purposefully build in new functionality to enhance those possibilities.

Now contrast this with a traditional pen-and-paper RPG, and especially something like Pathfinder or D&D4. It's amazing to see the shift in focus, now, these games focus on character builds, balancing everything, and telling you what to do. By the time the designers and forums get done with the new expansions and character classes, there is little room left to experiment, it really has all been done for you, any fun combo balanced and planned out, and all the options thought of already. There is probably a little fun in multi-classing, but really, any of the D&D style games typically either break or have the fun balanced out of them by the time the next edition rolls around.

In addition, the focus of pen-and-paper games often breaks down to a mindless pursuit of levels, character power, and loot. They really are nothing more than Facebook games where the whole goal is to increase your "numbers" and "get your friends to play!" Yes, there is that thing with the story and what a good gamemaster brings to the table, but that is the exception more often than not. Pen-and-paper games fall into the trap of making character power the ultimate goal, when in reality, there is nothing fun about character power than having bigger numbers, and being able to end combats quicker. In Minecraft, yes there is loot and character power, but it is capped at a point, and it is definitely not the endgame focus. How you play and what you build determine success; not, do you have diamond this and that. Those are still tools, not auto-win weapons and gear.

Where is the creativity? Where is the experimentation? Where is the game that celebrates what you create, instead of the modules or books you buy? These are things other people create, and yes, they want to make money and sell you lots of stuff too, but all those modules and stories and expansions drain the life out of your creations, how could you ever write or create something better than the paid stuff? Player-created content takes a back seat to official re-tellings of The Tomb of Horrors or Pathfinder's adventure paths. At times, it feels like there is no creating anything; modern pen-and-paper games feel like they are there to just serve up the next official module release to you, and there is always another book to buy to make things more 'fun' next time. You imagination, and your shelves, sag under the weight of everything you need to buy to start having fun.

Minecraft celebrates the simple, it's basic building blocks plus some rules, and it leaves the rest to you. The basics of the game haven't really changed, it's still the same simple building game with a few parts and many possibilities it started as. Big game companies, and this includes pen-and-paper as well as video game, just don't understand the 'simple is better' concept. I'm sure if a big PnP or video game company designed Minecraft, we'd have the following expansions to buy before we could start playing with others online, and having fun:


...and so on until my wallet is drained and my mind hurts. Also, the official Minecraft: Adventure Pack 1 through 25+ would be the better maps to play on, nobody could really build maps that compare to the official releases, right? The game just wouldn't come with those awesome tools or random worlds that everyone loves.

I leave you with this, a dark picture of the end of the main shaft down all those stairs. Now, what lies beyond this? How would you build the stairs? Would you dig down, or off to the side and look for a cave to explore? The game's focus is on 'what will you do next?' It's not, 'Where do the game designers want me to go?' That is the difference, and frankly, it's where the vaunted benefits of pen-and-paper games fail in comparison to simple games such as Minecraft and other building-block games. When the creativity, experimentation, and fun is designed out of the game, you have little left. Simple, open, and games that let you build are infinitely better than games where you run a system until max_level and everything ends.