Here is an interesting dice set, the Ultra Pro D6 set. I ordered these looking for a standard-sized numeric set of dice and by the look of them I was expecting a set with some heft and weight. What I got was different, but still an interesting and somewhat humorous set of dice.

They are slightly smaller than your normal 'board game' d6 dice, and they are also considerably lighter. They are also very, very rounded and combined with their light weight, they roll all over the place, spin on a corner, bounce off decks of cards, roll in large circles across the board, and generally never stop rolling around during a throw. If I ever wanted to annoy a gaming group with dice that just do not stop puttering around and taking forever to settle down, I would use these dice.

One took a near-perfect two-foot diameter circle path around our Eldritch Horror game board before bouncing off a deck of cards before stopping. Another spun on its corner for a whole second before flopping around to come to a rest. One had to be caught before it rolled off the table - after it bounced off a deck of stacked cards and rolled right back at me in the opposite direction in which I threw it.

Their light weight means they are less likely to knock over game pieces and push things around, but their silly antics in a way endears me to these dice. Rolling them and seeing how they can annoy or entertain you on the next throw makes them worth the price of admission. They are my my go-to "crazy dice" set. 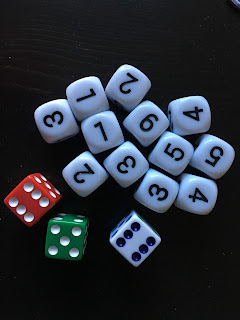 I wished they were a bit heavier and a bit less rounded, I was looking for a larger, heftier set of non-pipped dice. I wanted a set with some mass and gravitas for a tabletop game we are working on, almost like a numeric version of the standard board-game dice.

Am I happy with the set? Well, that depends. As serious dice I would stake my character's fate on? Probably not, because I don't want a set of dice causing a distraction for me or other players at the table. As an entertaining diversion for a lighter-hearted game, or to use as a set of replacement dice for a traditional game, such as Monopoly? Then yes, because these dice and their antics would definitely add to the fun of the game.

If I am in a situation where the 'party atmosphere' is more important than the rules and a set of dice could enliven an already dry game, then yes, I would say go for it and use these. Seeing what the 'crazy dice' will do would become a part of the fun and add an element of unpredictable chaos to the next roll, and make the drama of both good and bad rolls more entertaining.

If you absolutely do not want to roll a seven and one die comes up a six and the other one sits there spinning like a top for two seconds before falling on a one, I would say that would be a pretty entertaining failure and one the group is going to remember. Normal dice just do not do that often enough, but these...at times...can.
Posted by Hak at 6:00 AM No comments:

Email ThisBlogThis!Share to TwitterShare to FacebookShare to Pinterest
Labels: dice 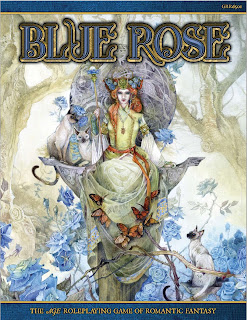 The Kickstarter books have finally started shipping for the Blue Rose (AGE System) RPG and I just got my PDF copy - and the book is on the way. Needless to say, I am impressed by the PDF, and it meets and exceeds the art direction and quality for many modern releases - Pathfinder and D&D 5 included. More on this soon as I flip through the PDF and wait for my copy in the mail.

Would I play this over Pathfinder or D&D 5, especially for dramatic adventures? That is a good question, and from what I have seen this does a good job at being different. I get this feeling in both Pathfinder and D&D 5 of playing those games to "be in a D&D type world" and I feel at times that familiarity can become a burden at times - what is known is known. You got the drow, the mind flayers, the beholders, Golarion's goblins, the planes, demons, dragons, and so on - what has came before is new again in a JJ Abrams style of reboot and going over the same old for nostalgia reasons and good feelings.

I don't mind nostalgia, but there are times when I want to be thrown out of that box and dive into something new. Something where I have no clue on who is who and what is what, and have a completely unknown and new world to explore.

Blue Rose does a good job at presenting a dramatic-experience themed game. But from what I have seen, the world is vastly more interesting and compelling with all sorts of social relations and interactions, great evils, and dark forces at work looking to destroy the world. This is not just "romance fantasy gaming" per-se, but a real Game of Thrones style fantasy world worthy of consideration and exploration by serious fans of fantasy.

This is not just a narrative game. There is plenty of room in here to go gamist, simulationist, and go dark in story and content, and as someone looking for that dramatic "something more than dungeons" in my shared storytelling experiences I am very interested.

More soon, and this looks to be an underappreciated, but compelling and wonderfully readable and approachable classic.
Posted by Hak at 9:55 AM No comments: