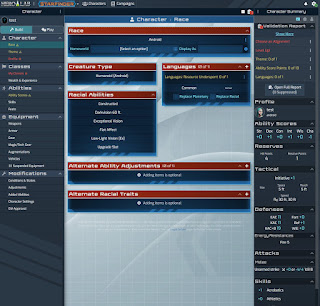 I am back in Starfinder for a while and decided to check out the Hero Lab Online (subscription, expensive) product for creating characters. In my first campaign, I used the Starbuilder app (an excellent app, one price for everything), and as I suspected there were differences between the characters I built.

My one issue with Starbuilder was having to use Android to manage characters. I have an Android tablet, but I love typing and working on a PC screen so it was an annoyance to have to cloud transfer the PDFs around so I could have them elsewhere. I just work faster and more free on a PC, where I can look for character images, type a lot of text quickly for backgrounds, and generally work more comfortably than on a tablet.

Also, Pathbuilder 2e (the Pathfinder 2e app) is coming out with a free web version, which I find highly interesting.

Hero Lab Online is very nice. They made some strange UI choices where I am chasing down errors in different tabs, the equipment lists feel arbitrarily divided up between tabs, and I do miss editing the data files or crafting my own - maybe they will implement this in the future and let us create custom entries. Some of this is due to odd choices in Starfinder where mechanics have to have a "custom rig" attached to a particular type of tool kit, you click on the error, and it does not tell you where to go, what to buy, or what to do. They have special pieces of equipment called things like "hacking kit w/custom rig" that you buy and the error goes away.

Also, my complete Pathfinder 1e Hero Lab collection is now online. Very nice. Considering I can use anything in Pathfinder 1e in a Starfinder game, this doubles my content for monsters, races, characters, and all sorts of craziness. The subscription fee? Not too bad, but I have a lot of Starfinder books I want to have fun with, so I either pay up and have a tool that makes my life easy, or these are going back in a box and I am not having any fun with them.

So, why back to Starfinder...?

Sorry, Pathfinder 1e is still a great game played by many people, and I have 13 years of books I can use with Starfinder. Now,  I can't go an give a Starfinder character the Pathfinder alchemist class, but I am free to have an alchemist NPC as a part of a campaign. I can toss a purple worm at the party and watch them blast it with rocket launchers. I can use a classic Pathfinder 1e vampire and put her in a starfighter. Any one of the classic dragons can show up, wearing powered armor with miniguns on the sides of their helmet and air-to-air missiles mounted on their back.

Lucifer himself from Tome of Horrors Complete could show up and start demanding planets surrender to him, and then sending his generals around to conquer worlds and the players racing around trying to stop his dastardly plans in epic adventures and massive star battles.

The true "Pathfinder in space" stuff we were promised.

Stuff I have game stats for and is 90% compatible with Starfinder (conversion guide in the back of the main Starfinder rulebook).

I am staying away from the Starfinder adventure paths, maybe I will steal parts as filler, but the campaign I want exists hundreds of years in the future, way out on the edges of explored space, so far away from Absolom Station that people derisively call that place "The Core" and they live in an area of space called The Shattered Expanse, a frontier area of former fantasy worlds and civilizations that gone sci-fi. That Heavy Metal campaign of countless worlds and endless wars.

And there are hundreds of moons and planets in the central supergiant star of this area of space called Titan, and they are all being fought over by different space factions. You conquer Titan, and every star within hundreds of light-years shall be yours just because of the wealth, resources, raw energy, and space for the population you will have. 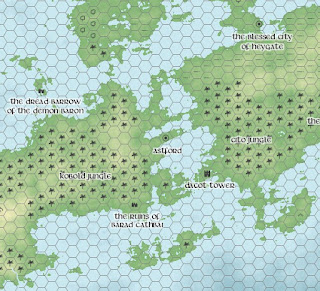 I start off simple, on a resort world (generated with the tools at donjon) ravaged by war, between the space paladin factions and the star demons, with opportunist space orc raiders coming in to try to stake a claim here, and expand from there. Put a neutral corporate faction, allied with goblin traders (the more World of Warcraft corporate goblins and not Paizo's) trying to hire mercenaries and reopen the resorts to make money.

Since all of these worlds were once "Pathfinder 1e fantasy worlds" and have been for thousands of years, lots of lost civilizations, temples, old-school monsters, magic items, scrolls, artifacts, magic +2 swords, and other powerful stuff lying around - and adventures and exploration to have. Maybe there are even forgotten civilizations of people that don't know anything is going on out there and are still living in medieval villages and grand castles. Lost tribes of lizardmen. Dragons that plot to manipulate the outsiders. Elemental temples of evil.

Subdivide these 20-mile hexes into 2-mile mini hexes, stock them randomly with ruins, lairs, encounters, crashes starships, small settlements, and all sorts of hex-crawl crack and we are good to go.

I am keeping it simple.

Everything Pathfinder 1e compatible I got.

In one epic hex-crawl game covering multiple worlds and all the space between.