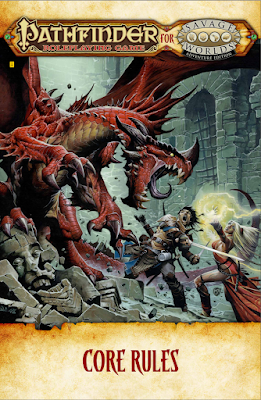 The boxed set for the Kickstarter finally came, and it is an amazing box packed with fun. It is huge!

Part of me now wonders "why I need this" since I am buying in on Pathfinder 2, but once I am reading a lot of Pathfinder 2 the more I am realizing the second game is a true steampunk world and nothing like the 3.5 we were used to and loved.

A lot of the adventure paths for Pathfinder 2 have guns and gears like crazy, gunslingers, cowboys, robots, steampunk mechs, self-powered wagons, flying ships, Gatling guns, and trains or blimps would not surprise me at this point. Golarion has moved on a tech level to the Victorian level with Pathfinder 2 and it is not going back. I am seriously going to play Pathfinder 2 as 100% steampunk, with the Victorian sensibilities, the pomp and dress, Absolom as the British Empire, and all sorts of plots involving machines and magic.

I do miss the old 3.5 Golarion though, and the ability to drop in Pathfinder to any medieval fantasy setting and have it work. So again, what do you do with this set? Well, exactly that.

Anything that needs a pulp adventure set of rules for the fantasy genre this would work. Like a Savage Worlds version of Mystara would work well. So the common traits are:

I could do Greyhawk or the Realms with this set easily. I would probably leave Golarion out of the equation here since I have both the Pathfinder Card Game and Pathfinder 2 to cover that. If you don't want steampunk or Pathfinder 2, love Savage Worlds, and want a set of fantasy rules with all the fixings this is perfect.

Part of me feels tired of the steampunk and dungeonpunk tripe though. I see a lot of games do these just because they want to be lazy and make it easier for players to have their "magic cell phones" or "magic air travel" and other modern conveniences and enable this player tech-entitlement thing where nobody really has to roleplay living in a world without technology. When steampunk is doing new, amazing, cool, I have never seen this before stuff - that is great. When they are using it as an excuse to recreate  "fantasy" cell phones, the Internet, cars, Uber Eats, Twitter, or other modern innovations - that is just horribly lazy writing and terrible world creation.

This boxed set is cool. A set of fantasy rules where I can drop this in anywhere and have fun. The Savage Worlds engine running things. The 3.5 style tropes guide character development. Lots of treasure, magic, and monsters to use in my games.

Simple, clean, and cool using a set of rules I already know.

What is not to love?