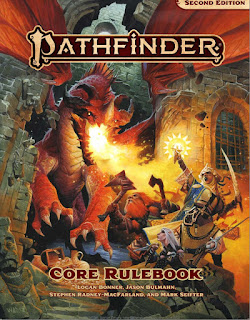 I hear a lot of good things about Pathfinder 2e, and the challenge and "Dark Souls" level difficulty appeal to me. I have recently renewed some of my subscriptions to the books, in fear that some of the early 2e volumes are now out of print. I suppose global supply issues and all that, but I'll be damned if I ever will pay a scalper's price for a book.

Is the system a failure? Well, by current metrics (if you listen to some), three times as many players still play Pathfinder 1e than 2e. I think it is struggling to find its message and audience, my question always is, what is it? It is a D&D 5 alternative. Well, usually that is never enough. You really have to be your own thing. With Pathfinder 1e, that was easy - you don't have to stop playing D&D 3.5 if that is your game.

And the current problem for Paizo is, that people have not stopped playing D&D 3.5, and that is still their game. I am one of them. I just have too many great books and years of things to do in them. To me, Pathfinder 1e will always be one of my favorite AD&D-like games and stick strictly in the fantasy area.

Really, I feel one of the best things that can happen for both D&D 5e and Pathfinder 2e is for the current D&D 5 pop-culture fad to end, and roleplaying goes back to being for fans and those who love the game. Just ask Pokemon cards, the Wii, Bart Simpson, The Walking Dead, and Rick & Morty, no pop-culture phenomenon this white-hot lasts forever and I have this feeling D&D is getting terribly overexposed. Once the D&D movie comes out we will see, I suppose.

Another thing that could happen to D&D is it goes Avengers-level MCU mega-hit and it gets sold to Disney and goes entirely Hollywood. I feel there is a risk of mega-success the game getting forgotten or becomes a profit football between companies that mismanage the gaming aspect of the franchise, like the "it's a sure thing" Avengers videogame disaster.

So Pathfinder 2e will always be here, and I hope things settle down for D&D 5 to a more normal level. I feel even those who love D&D 5 and Pathfinder would see this as a good thing too, with all the silly hype ending and the games and players becoming more important that brand advocacy or marketing.

Those who love and play the games will always be here, so I am not really worried.

What is Pathfinder 2e?

I do think Pathfinder 2e needs its "thing." Some of the recent books have expanded into "high magic" and "steampunk" areas, and those are interesting but also they feel a little like genre-changing books. The Guns & Gears book dabbles in the pre-Industrial era gunpowder siege warfare time with black powder cannons and artillery.

Has the Pathfinder world moved onto a Victorian steampunk reality? Or is this still Renaissance-era fantasy? To me, the former would be how I run this - I have done my time in Golarion with the thees and thous of the fantasy era, and for 2e to feel like a thematic shift, I would dive straight into airships, clockwork cities, and the slow creep of that pre-Industrial era grime and ash-covered reality.

Which probably sets up something very interesting... 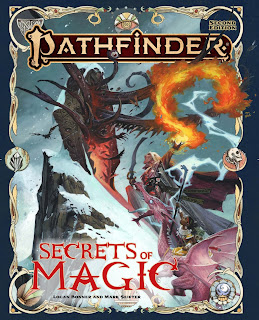 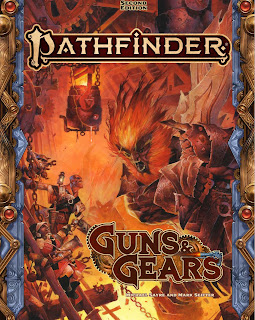 Secrets of Magic? Meet the enemy. Guns and Gears.

On one side you have magical orders, wizarding guilds, and those who believe in the practice of magic. The old guard knows what is coming. They watch as the old ways are being replaced by the march of technology. Intolerance, suspicion, and hate for the practices of magic are growing. They know as the armies of the world grow, the places of magic shall be destroyed, and even powerful creatures like dragons shall be driven extinct.

On the other, you have greedy corporate steampunk conglomerates, ruthless strip mining operations, trading guilds, forced servitude, the advent of banking, and the greedy governments who feed off of technological exploitation. They want to turn cities into coal-burning industrial era hellholes. They want populations to grow uncontrollably. They want to chop down every tree and strip mine every hill, poisoning the water, factory farming, and stealing every resource for themselves.

And the governments of the world smile and support them as the gold is handed over. A few more payoffs and easy lives for me and my family, please, thank you, and we will look the other way. Whatever war you want to have over there, of course, we shall support it! Conscription shall begin among the poor shortly.

And I am sure the new Book of the Dead could be introduced as a third faction in here somewhere...

Not a Happy World

Pathfinder 2e presents this Disney-style world suitable for kids. This gets tossed out. Absolom's money, reach, influence, colonialism, and greed become a corrupting force (think the British Empire or American Exceptionalism). I am given permission to include all of the above themes on pages 43-44 of the 2e Gamemastery Guide. All of the below are allowed in my game:

Only this is happening on a world-level scale. And the fight is between magic and technology.

I know, "The technology is powered by magic!" But once you think about this concept for a while, you see it as technology subjugating magic as a power source. Magic should not exist without the machine. Those who do not use the machine to use magic are a problem. Why?

Control the machines, and you control magic.

Really, this lens for seeing Pathfinder 2e excites me. It creates the "next big evolution" in Golarion as the forces of old try to keep this world from turning into some twisted steampunk version of Earth. The industrial era is coming, and those who want magic to be free and for everyone will be the enemy.

This is what happened in our world. We got the Industrial Revolution followed by the genesis of modern capitalism. Wars were started for profits. The world's environment suffered irreparable damage. This may sound like socialist theory, but even those who believe in free markets know all this is true.

Part of the fun here is the tangential factions looking to twist this war to their advantage. The realms of the dead, demons, devils, dragons, humanoid factions, cults, cabals, followers of gods, and all sorts of others looking to interfere, make things worse, or step in and take over for themselves are all the seeds in which adventures are born.

While the world was busy fighting with each other, no one saw something worse taking root and threatening us all...