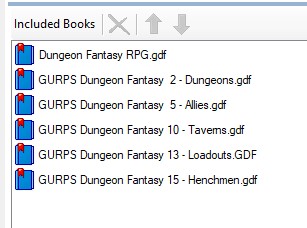 The above is my recommended load list for GURPS Character Assistant 5 and Dungeon Fantasy. You will notice a few missing, and that is because I was going through them one at a time and seeing what they added. If they added a ton of junk, such as modifiers to spells or skills that bloated the lists terribly for not great gain - I deleted them from my load order. With that said, I do not recommend the following:

Sages, Ninja, and Psi are so rare I say leave them out unless you are using them. Clerics and Summoners are the worst offenders, but even Next Level and Adventurers add "Holy" and "Unholy" domains. Adding a dozen new subdomains for clerics and spirits is just not worth the skill and spell list bloat for hundreds of extra spells, all very specialized variants like the following:

These are just two spells, with 18 specialty options each - and this goes on and on for many spells! With my load order list, this is what it looks like: 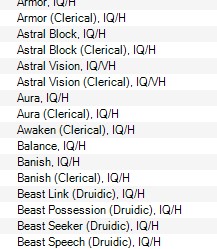 When we base the game off of the GURPS Basic Set, things get a little different... 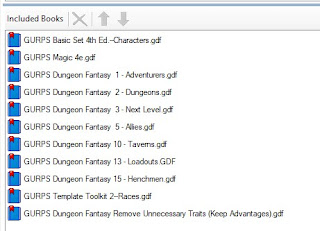 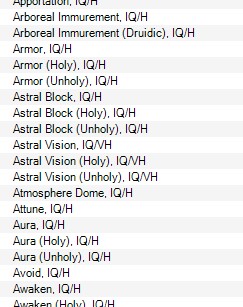 Without Cleric in there, the Holy and Unholy power sources make sense in terms of the main game, and if you scroll down you notice Druidic - which is perfect. Three power sources I can live with.

I am also free to add Bio-Tech, Powers, Thaumatology, Low Tech, or anything else in there. I just did these since they get you the Dungeon Fantasy experience, plus the race options from Template Toolkit 2.

Also, I am using a hacked GURPS Magic 4e file that removes all those insane Herb Lore and Alchemy subskills, and having those appear on skills like Cartography (Herb Lore) and Sex Appeal (Alchemy) makes no freaking sense whatsoever, and it all but makes the GURPS Magic 4e file worthless to me. I backed up the file, deleted those huge blocks of code that add a few hundred worthless variant subskills, and my skill list and load times are thanking me. I still have the "pick a specialty" versions of Alchemy and Herb Lore, so I am not losing anything of value.

Also note my hacked Remove Unnecessary Traits file at the end there, as we created in a previous post.

Pick Only What You Need

GURPS Character Assistant is a great program, but it comes with way too many options and if you start adding anything and everything to your libraries, things get unplayable and unmanageable really fast.

I like being able to scroll through a spell or skill list and pick out things I want. Add a few thousand mostly worthless repeat options on there and my eyes glaze over and I go back to Pathfinder 1e.

Being selective with your libraries, and not being afraid to edit the files and make them your own is the key to getting the most out of this program. Also, please BACK UP your edited and unedited files, as any updates will likely blow them away without warning.