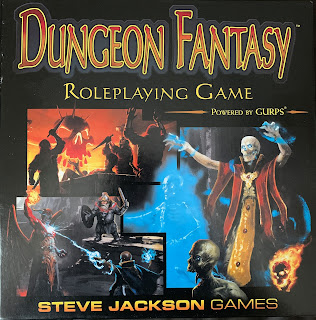 GURPS is going through something of an evolution, and a lot of the PDF releases on Warehouse 23 reflect this style of game being created with the rules these days, and it started with Dungeon Fantasy. GURPS 4.5 "sort of" exists today in the heavily templated and cut-down subset games of:

Dungeon Fantasy is special since it is a standalone game, but you see that influence in the other games on the list. Take a genre, cut GURPS down to the bare minimum needed to support that genre, and all of a sudden you have a more focused and more playable game. The spell lists are shorter and have no cruft, the skill lists are pared down and usable, and the advantages and disadvantages are focused and support the genre. We have templates to make genre-focused archetypes.

When you play, there is nothing extraneous or genre-breaking to distract you.

And then these games expand from that simple starting point and add layers of complexity.

But as you play, you begin to notice options missing that you would have liked to pull in. If you are playing with pen-and-paper, everything is cool, just pull the other book over and write it in. If you are using a computerized tool, things start to become difficult. 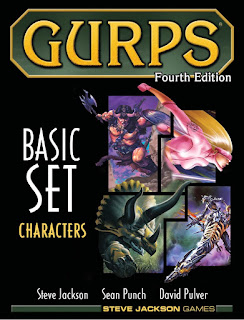 And there are times when I see some of these games expand into different areas adding layers of complicated rules, when I smile and sit there saying, "The base GURPS game does that easier than adding all these layers of complexity."

GURPS can die under its weight of options, and if you ever loaded up GURPS Character Assistant 5 (GCA) with all the base books in a library (Magic, Fantasy, Space, High Tech, Low Tech, Ultra Tech, etc) you are going to know what I mean. The game gets better the more you cut it down. I can't deal with a skill lest a few hundred skills long, that is just way too much - even with sub-lists divided by type.

In short, you play with every GURPS book and you create a game that I feel can't really be played.

The game is better once you cut it down, and begin to exclude things from the experience.

My problem is I love tweaking things. I love designing unique characters. I love some of the options they excluded from Dungeon Fantasy, which is why I hacked my GCA files to create a game that can be played with a few other books to pull in things I like. Even my base Dungeon Fantasy setup has tweaks to use some of the classic GURPS roleplaying disadvantages, like "Hunted By..."

I also like my GURPS Dungeon Fantasy setup in GCA since there is a wisdom in not lumping every spell into "Cleric" - since unholy spells get a cool list of ones that deal with destruction, curses, zombies, dark vision, death-touch, and lots of other "awww cooool" spells.

But oh no, mages can cast healing! Well, you know, just disallow it. Like you disallow letting characters the ability to go de-solid or fly. And great players won't even pick those powers because they know it is silly and it doesn't fit the game's theme. This is kind of like a group coming together and trusting each other to make good decisions and choices to not break the game or immersion.

Clerics buy the things you feel clerics should have. Mages get mage things. This is all based on your world. In some fantasy books, there may be no clerics and mages do healing as well. Or maybe nobody can. You need to do some thinking about your world here and make some decisions.

There are times I love Dungeon Fantasy's focus. There are others I look at my skill and spell lists in my custom GURPS Dungeon Fantasy world and see a game I can expand infinitely, and that gives me millions of more ways to customize characters. There are good parts about subset games like Dungeon Fantasy, but also when you realize the true power of GURPS you see a lot of needless limitations.

And there are parts of the game you may absolutely fall in love with (I hear this about GURPS Thaumatology), that you may never experience or know about if all you play is the subset game.

I feel there is this difference between modern gamers that want to be told what characters can and can't do and work within those limits; versus the old school GURPS and Champions players who you can give a game that resembles a box of Legos, and can create a cool dungeon game out of it by putting a few things together.

It makes me feel these toolbox games just are not understood these days, nor do people have the time or the care to invest time to make them work. I can imagine giving GURPS to a group of today's gamers and they would be sitting around the table...

What are we playing? A dungeon game? Okay, if you buy ten levels of duplication and five levels of extra attack, you will be able to attack 50 times a turn! I am buying insubstantiality and flight along with mind control, so I can fly through walls and scout ahead! You buy invisibility and 20 levels of damage resistance! No one can see you or damage you!

And I would be sitting here asking, "What are you guys doing?"

And I would be met by a table of blank stares and the answer, "Playing the game."

Forget it, we are going back to D&D 5 tonight.