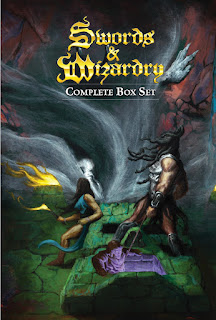 Swords & Wizardry only allows STR to hit and damage bonuses for fighters.

Not rangers, monks, or paladins - only fighters.

Those are not fighters; get the AD&D fighter sub-classes out of your mind. They have other powers.

Now I want to play a fighter.

This is a strange concept coming from B/X, where the default assumption is everyone gets to hit and damage bonuses for everything. Taking it away feels strange. But what about my thief? What about my ranger? We always had those bonuses! This is unfair! Find a magic weapon if you want a non-fighter class to get a hit and damage bonus.

But I get it; this is how it was in the old days.

And a part of me likes fighters being incredible again.

In many cases, your damage modifier matters more than the die of damage you are rolling because now you have guaranteed minimum damage. And fighters with magic weapons rock like Conan. Put a girdle of giant strength on your fighter, and you are a severe damage dealer.

Even with a bow.

We do not need a barbarian class in this game; fighters have it covered. In fact, needing a barbarian class feels like the fighter class in the game wasn't working right, and you are not forcing players to choose between two similar options only with a slightly different job or attitude. I could say this for any fighter-synonym class, such as knight, cavalier, archer, champion, guardian, or any other word you can pull from a thesaurus.

There is a difference between a class and the jobs that the class can do.

Paladins, rangers, and monks all feel different enough that they should have a class. Paladins have magic powers. Rangers have a unique skill package, almost like a thief. Monks fight differently.

Original Game Had It Right

This is an excellent example of returning to the original rules and finding the original intent of why the rules "were how they were" and bringing that back. Giving everyone hit and damage bonuses for a high strength sounded "fair" in later versions of the game, but it ultimately made fighters weaker and less enjoyable to play. Fighters are trained to use a high STR to maximum effect; other classes are not.

I get the feeling legions of house rules flooded in after the original D&D, and since "everyone played that way," the designers changed the rule to give everyone the bonus. Maybe they should not have. Many Monopoly players have house rules, and some traditions mess with the game's balance.

Part of me feels TSR tried to put the cat back in the bag with the "percentile strength" for fighters only in AD&D. When they realized giving everyone STR hit and bonus damage took something cool away from fighters, they tried to patch the issue with the 18/01-18/00 strength system for fighters only.

What this ended up doing is requiring every fighter to have an 18 strength, killed 3d6 generation, and inflated all of the hit and damage numbers incredibly. Doing 1d8 with a longsword is very heroic in itself, but letting fighters have the training to maximize strength into battle prowess is honestly what their class should be about.

And then you see what happened as the editions went on. Next, fighters needed to be buffed to make them interesting and worth playing again. The hit point scale inflated, and the base weapon damages started to mean less and less. To do serious damage you needed multi-attacks or special class abilities. We go down the road of weapon proficiencies, fighter feats, fighter power, class abilities, and all sort of other buffs stacked on the game - which invited other classes to get similar buffs - and you wonder if any of this would have happened had they left the "fighter only STR bonus" as the rules in the game.

And if this makes rangers, monks, and paladins weak - revisit their powers without giving them the bonus and see what can be done. Looking at them in the rulebook, I can say the other classes have plenty of extraordinary must-have abilities, even at low-level. Monks? Always on damage bonus. Rangers? Party is rarely surprised and tracking. Paladins? Impressive saves, disease immunity, and lay-on hands.

Clerics? Be patient. And turn a lot of undead. Have faith.

Lamentations of the Flame Princess does something similar by only letting fighters have a meaningful attack bonus progression, and every other class is capped at a +1, no matter their level. Again you see the asymmetric design, which is not unfair; it is a design decision and how the game works. Sometimes I look at some B/X games and see them not being brave enough on design asymmetry, and I feel some classes are lacking, and others are overpowered.

Swords & Wizardry makes some bold design choices, and they feel right. I also need to mention the excellent Iron Falcon, which provides this as an option too.

Let the Conan character be Conan.

Let the front-line fighter be incredible.