Books for Games, The Renaissance 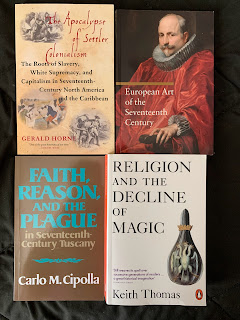 Okay, most of this is dark stuff. A book about colonialism and the brutality of conquering native populations, and the start of the slave trade. An art book showing architecture, clothing, and the feeling of a Renaissance setting. The Great Plague. A book about the decline of magic and witch trials. If you put any of this on your typical "roleplaying PDF store," you would get an adult content warning. Yes, even for the art book because it has artistic nudity.

No warnings on Amazon, where the grown-ups shop.

Bleh, we are way too protected from ourselves and our dark pasts. What game are we considering these for? Why can there only be one... 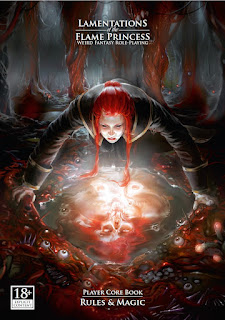 Yes, Lamentations of the Flame Princess, and this is the signature game of fantasy horror where you know you are screwed from character creation. You are all guilty by default of being a part of the wealthy, exploitative, decadent, callously cruel, wasteful, environment destroying, slave-taking, rich, and colonial power that just messed with something they should not have, and all fall like cast members of a Friday the 13th movie.

I can't play dark horror in D&D. In Pathfinder 2e, some of these concepts are banned.

This is fantasy horror at its best.

And I love shopping for this game because I am diving through some of the most twisted and horrible history books ever written. I don't have to buy game books or adventure modules; I got tons of content just for this concept alone, reading history. Want more books? 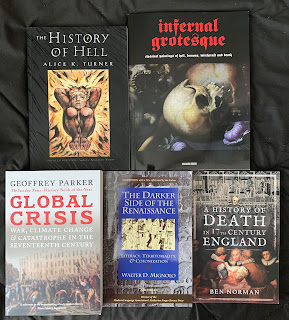 Forcing native cultures to learn a language and to change their beliefs at the point of a sword? Taking them for slaves? Needless wars to make the rich richer? Stealing wealth from primitive cultures to enrich the wealthy back home? Books on the nature of Hell and how it changed as a tool of societal control? A history of death? Climate change? Oh, we have it all here. I might as well have "works with LotFP roleplaying game" stickers made and stick them all over these books.

I seriously think some of the history books from this era are better than the printed adventures for the game. In fact, many of them are worse and could never be published as "adventures."

And it all happened for real.

If you ever wanted to know why Renaissance society was one of the evilest and heartless this planet has ever seen, just open a book. And yet we romanticize this era with modern high fantasy and rewrite it to be more inclusive. This is like taking some of the worse genocides of the 20th Century and rewriting them to be more inclusive and family-friendly and putting them in roleplaying games.

We need our escape; this world is horrible enough today to be constantly reminded of how awful it was in the past.

But to "get" LotFP, the way I play it, you need to know why the characters in that game deserve all the terrible things that happen to them. Great horror has that puritanical notion of punishment for sins, like the original Friday the 13th. And great horror has a deeper meaning to the events of the time it was created. The paranoia and mistrust of John Carpenter's The Thing can be seen as an AIDS metaphor of the early 80s. We shy away from these things because they make us uncomfortable.

But when we can experience them in a safe environment, we learn more about ourselves and our fears. And we may know why these things done at this time were so horrible.

And maybe we reflect a little and try to make up for all the awful things back then.

Or we could keep forgetting.

Hundreds of years after our rose-colored Renaissance, the default setting of all of our popular fantasy games, we are still living with the disastrous effects of that time. And yet we continue to put the time on a pedestal and rewrite it instead of facing what that moment in Earth's history did to us.

We will never make it right by ignoring it or painting it over with varied and colorful hues.

Or by banning them in stores because they upset a few people. If I were a part of a culture that was wiped off the planet by colonialism, I think I would want people to be a little upset.

When you consider this, LotFP goes from being "that silly B/X game that uses shock value to sell books" to an actual top-tier roleplaying game. There are times I see LotFP adventures doing what Dungeon Crawl Classics does better, and I feel those are a bit misguided. This is more like Mork Borg to me, but with a sense of impending doom and punishment for all characters in the game for "what they did."

Very few games inspire me to go out and educate myself like this.

And yes, I know about the referee's guide's advice about "not using the real world" as a setting. A lot had changed between when that was first written and now, and there are great B/X and OSR options that did not exist back then. But all of them are in the high fantasy genre, and where LotFP shines is in that unhinged Renaissance horror in a slightly realistic and non-fantastical world.

I choose a semi-realistic version of the natural world, slightly fantastic with the presence of magic but still rooted in reality. I am not using elves, halflings, or dwarves since they put too much Tolkien in the setting and break the unspoken rule of the familiar that horror requires. I play overseas and the New World not-on-Earth canon, as trips to these places should be fraught with strange, unexplained, and supernatural. A coast or island could appear in the middle of a charted ocean, and the ship is off in some nether-realm nobody knew about.

And the reasons for inflicting horror on the classic colonial powers and their seven-sins wrought followers are way too tempting to resist. I do feel, at least for me, that the shock value of LotFP has worn off and it does not sell me on the game anymore. What does sell me on the game is the message of unholy retribution on the sinful colonial powers that brought so much conflict, war, and injustice to the world and the same issues we still deal with today.

And dealing with these quite modern themes is the key to a great horror story.

A massive part of it is using that "shock value" to set you up for the things you learn - which actually happened - that will be even more shocking. A genital with teeth is one thing, but wiping out an entire civilization for their gold and land is entirely different. Popes who do all sorts of horrible things when put in a position of trust are part and parcel of this era.

And all of this is much more horrible.

Email ThisBlogThis!Share to TwitterShare to FacebookShare to Pinterest
Labels: game world, Lamentations of the Flame Princess