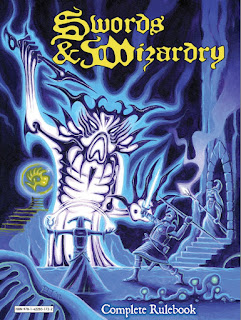 Above are three great discussions on the differences between Swords & Wizardry (S&W) and Labyrinth Lord (LL), and yes I know, so many have moved on to Old School Essentials (OSE) as their B/X game of choice. But I recently got into Swords & Wizardry just because of all the cool games based on it and wanted to check out the base rules out and to see why the game inspired so much hacking and custom games that started with these rules.

In short, Swords & Wizardry was the old-school hacker's paradise before Old School Essentials came along and built B/X as a modular experience. In S&W a lot is left up to your imagination and interpretation (like the old days), and the game is even supplied as a MS Word doc (so I have heard, I have not found the current link yet) so you can remix and rebuild the game any way you would like.

So a plethora of games were released using S&W as a core rules set, including a lot of the X! games mentioned previously, a WW2 game, and many others.

In regards to community choice, it does feel as if Swords and Wizardry came first, that was replaced by Labyrinth Lord, and that was replaced by Old School Essentials. Dungeon Crawl Classics still is in there somewhere doing its own thing. I get this feeling the more your game emulates the original rules and acts as a replacement for them, the easier you are to replace when the next cool thing comes out. Games that do their own thing (DCC and others) tend to stick around and maintain fans.

One Save to Rule them All

There is one feature of Swords & Wizardry that I feel is a genius simplification: the unified, singular saving throw number. You get one saving throw that improves as you level, and there is no chart reference or odd progression for this or that. No difference between saving versus spells or a wand. You just "save" and that is that, and there are optional "plus this versus that" sort of exceptions, like a class getting a save bonus versus something or the other.

You can even use the saving throw as a backdoor skill roll. Would a magic user know how to read those runes? Saving throw. Would an assassin know the handiwork of another assassin? Saving throw. Could a ranger or druid identify a plant? Saving throw. Basic Fantasy has a skill roll mechanic like this, but this way feels much more unified and sane.

I like the one save concept a lot, and it makes the "save versus..." charts on many other games look like unneeded minutia and cruft. I just ask myself why do saves really need to differ by a couple points in either direction for all these classes when you could just average them all out and give a bonus or penalty to a couple situations per class and be rid of all that complexity and have more flexibility.

It makes me wonder why the original designers of D&D felt the need to divide saves like this and if that was even the right choice or just pointless detail. If you wanted a species to be magic resistant, give them a plus on magic saves. Make that stack with a class also magic resistant for another plus. Or give assassins a bonus on just poison saves since they nick themselves constantly. Or give clerics a save versus opposing alignment (good or evil) magic.

You get a lot of flexibility here and a lot more options when designing races and classes versus having to print, update, and reference dozens of tables of saving throws. And these tables are huge, slow, and require a lot of recording and bookkeeping.

The one save number rule alone makes me a fan.

Very AD&D and Close to LL

Before Old School Essentials came along many were split between Swords & Wizardry and Labyrinth Lord for the mixed D&D and AD&D sort of mash-up experience. Then we had a lot of great B/X games released and rapid development of base games and new experiences. With the "advanced" companions for OSE coming out this year I suspect both S&W and LL are further going to be relegated to hardcore fans, but both always given props in the community.

You also have the demons in here where OSE's advanced edition removed them, so if you wanted the classic AD&D style experience with the demons and devils being the evil masterminds of wickedness in the world either LL or SW are great choices for your game.

S&W does feel like a 70's version of AD&D to me, sort of a stripped-down, pre-basic/expert set version of the rules with quirks and balance through taking away some of our standard assumptions (like all classes getting a STR modifier to damage in B/X land; only pure fighters get that damage bonus, and not rangers or paladins). The more tricky social classes (bards and illusionists) are not here, and this is feels like more of a retro-retro clone with some of our B/X assumptions turned on their heads.

It does challenge some of those B/X assumptions we have come to feel are genre standards, and it helps show you that breaking some things in B/X cannon (like the saving throw tables or assumptions of ability score bonuses) can actually make a better or at least more interesting game in some ways.

I feel it also highlights one danger of homogenizing on one B/X rules set as a standard, and forcing every B/X design to account for everything in one rules set over all others. Personally, I am happy owning, reading, playing all these B/X games and S&W makes a fine addition to my B/X play and game design toolkit.

For some not having these classes is a deal breaker, and LL does not have a bard class either. Though I found a great S&W bard here:

...and I am sure if you really wanted an illusionist you could always use LL's, or find another one like this one that took me seconds to search for:

This is S&W, the community of hacking is your friend and will fill in most of what you need. And there is also B/X to pull from as well. Since S&W is closer in spirit to the old days you are supposed to mod and hack and get playing. It is a different attitude from the "complete" type games like Old School Essentials where all of what you need is in the books (but you can mod there as well, TBH).

For all the game hacks and games created off this base, I still feel S&W is worth owning and playing, or at least as a companion resource to games based off of the core system. The system feels more 1970's D&D than Labyrinth Lord's early 80's AD&D feel, and that is something to consider. LL feels more like a nod to today's B/X conventions, while S&W keeps things old school (and thus has a more distinct identity in my feeling, especially when LL is compared to OSE).

There is also a lot of great high-quality content written for the game and worlds of content to explore here, and it is all B/X so it can be reused anywhere you eventually end up. So while OSE is the current game of the moment for the B/X world, I still feel S&W is a strong choice with some cool custom games developed from the core rules.

While I do like OSE a lot, I don't feel I need to play it exclusively. I will probably change my mind when the advanced books arrive, so there is that.

I could see myself designing a game originating on this rules set over Labyrinth Lord or even Old School Essentials, just because the system is designed to be ultra hackable and modifiable. There isn't much baggage here once you strip everything out beyond a handful of core B/X style conventions. OSE does a great job modularizing things, but S&W lets you tear down to the metal and rebuild.

The PDF is free too, so the price is right. I picked up the softcover too, just to have the book, and it was a great deal - and something I will be using.