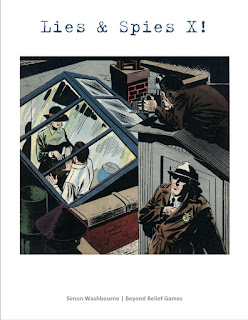 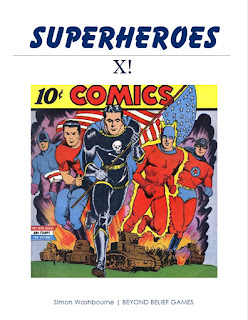 Here is a sweet find. On my investigation into "why play Swords and Wizardry?" (coming up) I found eight absolute gems of B/X pulp-comic gaming. These are each complete mini role playing games covering the topics of different pulp comics (which they pull public domain art from, which is cool).

I was looking for a B/X implementation of the classic Top Secret game, and I found Lies and Spies X! a cool retro-pulp spy game with an assortment of G-Men, spy, and other cool B/X style modern archetypes that go up to 6th level and play with a system that is B/X compatible (but more along the Swords and Wizardry style of theme).

After that I found Superheroes X! a cool low-powered early-pulp golden age superhero game that is compatible with all of the games in the X! lineup and gives you an interesting mix of characters, powers, and heroes. Wow. Cool stuff! 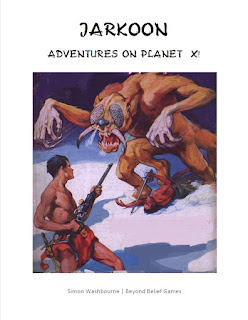 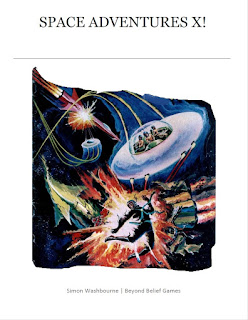 But it doesn't end there. We have retro Buck Rogers, Red Planet, and Flash Gordon style games with Jarkoon - Adventures on Planet X! and Space Adventures X! two genres I really love. You have all sorts of cool scientists, astronauts, space adventurers, diplomats, and other sci-fi B/X goodness in these books. Oh, and they are compatible with the other books in the X! lines as well. 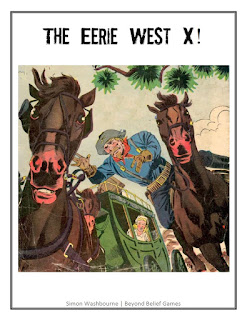 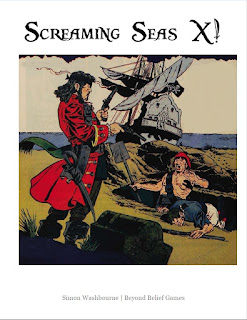 Want pirates and cowboys? We got those too with The Eerie West X! and Screaming Seas X! with a pair of strongly themed games set in those periods too. I am sure the western game could be a cool "out west" supplement for the other modern games like spies or superheroes, since those comics assumed the Wild West kept going up until about 1970. And again, all compatible with each other. 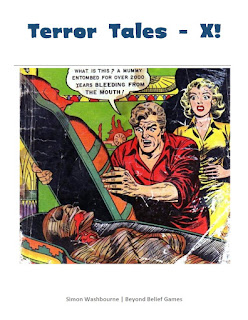 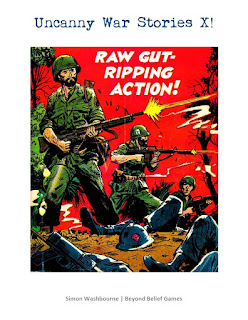 Let's round out the collection with Terror Tales X! and Uncanny War Stories X! two more genre specific games of terror and two-fisted paranormal WW2 battle stories. If you ever wanted to run a quick game from stories ripped out of 1960's horror comics these would be my go-to games. Again, these are all compatible with the others in this set, and you can also just pull in your Swords and Wizardry or B/X content as you see fit.

The presentation on all of these is very bare bones, the games run about 20 pages and they look more like nicely formatted MS Word documents than they do professionally laid out publications. There isn't too much in the way of fluff either, these get right down to the basics and stay there. But in that lies their charm, they are someone's homebrew notes for running cool and fun variant pulp-comic book games with the B/X rules across a wide variety of subject matter and they are all interchangeable for a whacky and zany "World of X!" style experience in the Swords and Wizardry style of universe.

I can see how some might be turned off by the presentation, but I see it as a cool throwback to the days of dot-matrix printed rules and shared content among gamers of house rules and homebrews. Would I want these someday to be redone and professionally presented? Of course, but without exposure that is never gonna happen. These remind me of the systems that were on sale in the classified ads of the old Dragon Magazine in the back, quirky, small press, and labors of love.

I do want to see more of these. Savage jungle style adventures. Ones where you play as vampires, mummies, Frankensteins, or werewolves. 1950's monster movies where you battle blobs and giant insects. Time travel. Samurais and ninjas.

I would also like to see the Uncanny War Stories one cover a wider range of content, from WW2 through Korea, to Vietnam (the cover image), and an option to remove the magic elements, but I could house rule that just as easy.

They are also infinitely expandable with your own house rules, gear, classes, monsters, and spin on things. Run a battle between a World War II squad and a red dragon. Have space explorers crash land on cowboy world. Run a superheroes versus pirates game. Pull the demons in from Swords and Wizardry and have them fight paranormal investigators - or G-Men. Or pirates.

Oh, and the PDFs are only a couple bucks each, less than a cup of coffee. What is not to love?

B/X is a wonderful world to explore, find gems in, and play in. The ultimate generic system is B/X, and you can find games that go off in so many creative and cool directions with a little digging and the desire to try something new and cool.