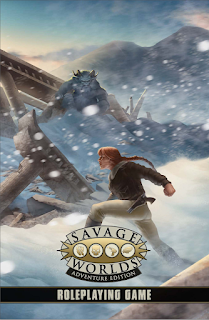 Savage Worlds Adventure Edition? How could a game get this good? This is as close to being a perfect "rules light" game for me as it gets, and its universal nature does not get in the way of anything I attempt to play with it. In speed and ease-of-play it puts both GURPS and Champions on my shelf as universal systems and I can run a dozen characters in this system on single-sheet printouts no problem.

I tried a Pathfinder 1e game with a dozen characters and the game died of complexity overload. Having two or three double-sided character sheets stapled together for one character means you are running four characters maximum for one person playing alone. Here? I can generate a dozen characters in about an hour and be ready to go with them all. Just in this game's initiative system it beats most d20 games in ease of use and simplicity.

Note they did an upgrade of the system to the "Adventure Edition" also known as SWADE. There are very few differences and the editions are mostly compatible, but if you are looking to play skip of "Deluxe" and other editions for "Adventure" and you will be all set.

You need to wrap your head around the concept of the target number, the wild die, raises, exploding dice, and the condition/wound system. Once I did that, the system felt a lot less strange and I could easily play this in my head or on the board. Conceptually this is a lot different than d20, but it just runs a whole lot smoother - especially if you wanted to spin up an entire ensemble cast and play adventures with them. I could run a Star Trek ToS SWADE game using the core book only, have the cast ready myself in about an hour (less with players, give us 15m), and beaming down to planets and fighting the Klingons and Gorn before other games died in a session zero four-hour character creation session.

Does it provide enough depth for long-term play?

I feel it does. While it doesn't do the huge "multilayered decorated Xmas tree" style class-character builds you can do in Pathfinder (1e or 2e) or D&D 5, what it does is simplify everything down to a simple base that requires very little book reference and lets you simulate the parts of games (like magic systems) with generic-style powers that can be flavored to give you the end result you want. A bolt spell that uses arcane energy? Magic missile. One power point. Attack roll using your casting skill. Damage as listed. Fine. Done. Let's play.

It may have an issue for very-long term play, but most of my games don't last that long anyways even with accelerated progression. Progression can also be scaled or tweaked depending on how fast you want advancement to happen. The max power level in Savage Worlds feels like the "level 12 or so" fun zone for most d20 games, and the system can scale past that point to give greater challenges.

There are custom skills and edges too, if you really need a character to have a specialized skill such as "photography," "spy gear," or "demolitions" for a 007 style game. If you really need it and it makes sense, clear it with the GM and get playing. No need for a 300+ skill long list of every option for molecular biologists and hazardous material operations. The core skills cover 90% of what every setting needs, and if a setting needs to specialize, make an addendum skill list of a few more (and if you need to, use the more skills campaign option if you run out of skill points for that skill-heavy game).

You may have trouble selling this game to players already "bought in" on the depth and balance of other games, such as D&D 5E or Pathfinder 1e or 2e (more on the latter in a moment). There is a generic element, especially when you custom-craft powers or build your own character builds that could dissuade players used to a 600-page set of rules they know inside and out. You come at this from a rules-light angle, especially with a setting pulled from a movie or TV show, and you may have an easier time selling this to a group than proclaiming at as a D&D 5E replacement. Which it is not, it is its own different thing that can simulate a traditional fantasy RPG, but not replace it rule-for-rule or build-for-build.

High-level play here involves bigger dice, higher modifiers, and pushing the action economy of multiple actions system to the limit. The system feels capped at the largest polyhedral die supported for ability scores (d12 with modifiers), so there is a maximum power level. The game feels like there is a lot of sideways progression beyond (bigger dice) with edges, and giving yourself bonuses in situations where the edge would give you a better bonus than a larger die.

Scale is relative. You could play a game where everyone is an intelligent mouse and scale the world to that, with the dicing being the same and assuming the larger creatures (cats) are the giant-sized monsters. Superheroes work similarly, you can cap normal people to a 4d or d6 and let the heroes be the exceptional ones.

If you wanted to mix in superpowers or horror elements there are books for that (previous edition but still 95% compatible), and now there are a few other reasons to play.... 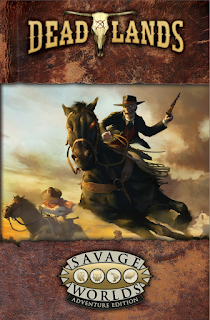 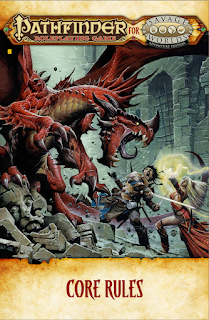 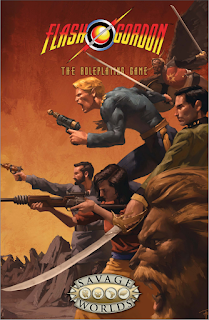 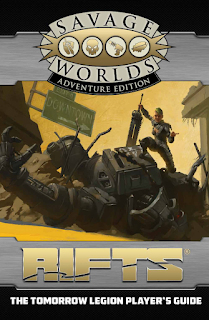 Pinnacle has been delivering themed games (licensed and their home settings) that are AAA releases. They have SWADE versions of Rifts, Pathfinder, and Deadlands out and they all are incredible. There is even a Flash Gordon one (previous SW edition, but still can be played either new or old rules) that looks incredible. I swear I have 20 more years of gaming in this set of books and I would be perfectly happy.

SW Pathfinder is an interesting creation, and this set I feel moves a lot of the current B/X de-jour systems down a notch on my playtime schedule. Here I have a rule system that gives me a complete zero-to-hero progression, rules-light, pulp-focused, skill-system, bestiary, magic items, and class-like builds? Ouch. This puts a dent in my Pathfinder 2e play time, and I am currently looking for an old "Pathfinder compatible" game world to play this in, since I am saving Golarion for my PF 2e playthrough.

And the rest of my B/X games (and other indie darling RPGs)  are sidelined for SW Pathfinder, since it does 90% of what I want in a rules-light fantasy game with enough "leveled creatures and items" support to keep the character progression part of my brain happy. More on this later. More on all of these later as I dive in. Especially Pathfinder and Rifts - two games I collected and have a long history with. Deadlands and Flash Gordon look fun and will be new for me.

But yes, Savage Worlds Adventure Edition, if you are looking for a rules-light toolbox generic system, this is one of those that sits on the top of the mountain and deserves a serious look.

More In The Works!

They are working on a SWADE Superpower companion next, and I hear Horror is also on that update list too. There is a previous edition Fantasy (kind of outmoded since SW Pathfinder is here) and Sci-Fi book to get, and those still have uses. I do want Pinnacle to do well and I am backing their kickstarters for the new books, and I want to see more in the lines of cross licensed games like the Flash Gordon one. Or even new books like the rules-swap Rifts and Pathfinder games for classic games (SW Paranoia would be fun, and I would love to see a SW Vampire/Werewolf/Mage/Hunter/etc. White Wolf style set of books).

It is nice to see the company doing well and its kickstarters for Deadlands, Rifts, Flash Gordon, Pathfinder, and now the Superhero book doing extremely good business. I am a fan and wish them the best with their new lineup of books, and plan on enjoying these myself in the near future.

More on all these soon as I dive in and play.